India Prime Minister Narendra Modi Recently Declared Of BHIM App Download ANd This App is A very IMportanr And Help Of Money Transfer So This Related Full Details Availble On Freshgujarat Website.Download ‘BHEEM’ Application In Recently Declared By Narendra Modi.Prime Minister Narendra Modi on Friday launched ‘BHIM App’ which he claimed would make digital transactions easy for the common man. The BHIM app, Modi said, was named after Babasaheb Ambedkar. Speaking at the Digi Dhan Mela at Talkatora Stadium in New Delhi on Friday, the PM said, “Prizes are given to those who make transactions of more than Rs 50 and less than Rs 3000, so that the poor can win. Over the 100 day period, several families will be given the prizes. These schemes were launched to benefit poor.”

Prime Minister Narendra Modi on Friday launched the Bharat Interface for Money (BHIM) app at the Digi Dhan mela in the Talkatora Stadium in New Delhi and stressed on the importance of technology and digital transactions.

Read More
He said the BHIM app had been named after Babasaheb Ambedkar. “Launch of BHIM app is significant. In addition to his role in making of the Constitution, Dr Ambedkar was also a great economist,” he said.
The naming of the app may also be an attempt to placate the Dalits, a voter base which the Bharatiya Janata Party has been fast loosing hold on after Rohit Vemula’s suicide last year. The timing of the launch is also important as it comes just before the Uttar Pradesh elections.
Notably, the poor was the focus of the prime minister’s speech at the launch today.
“This is the treasury of the poor to digital payments,” the prime minister said adding “Technology is not the treasure of the wealthy, but power given to the poor.” 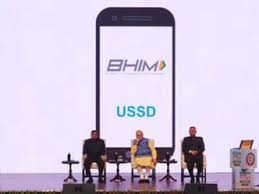 “The day is not far when the entire country’s trade will be done through this BHIM app,” said the prime minister. “BHIM app will be made so strong in the next two weeks that you won’t even need a mobile phone or smart phone, just your thumbprint.”

“Through Bhim, I’m giving the people the best view of the good times to come in 2017,” said the prime minister.

Modi also talked about the other initiatives launched by the government and said that the Lucky Grahak Yojana and DigiDhan Vyapar Yojana were “Christmas gifts” to the nation. He also said the government plans to reward those who used digi-payment options.
“There will be a mega draw on 14 April, the birth anniversary of Babasaheb Ambedkar, where rewards will be given to several people,” he said.

Taking a dig at the Opposition leaders who had criticised Modi’s call for a ‘less-cash society’ after demonetisation, Modi said, “There are some people who begin their day with disappointment. There are no options available for such people…When I talk about e-payment, some people doubt me and think I’m trying to bring something new,” Modi said, adding that technology like that had existed for a long time.

Modi also took a dig at the previous UPA government and said that earlier, people used to talk about the money lost due to scams like the coal scam and 2G scam. “But now, people are talking about the money which the country gained.”

Modi also thanked the media for asking questions post demonetisation. “In the last 50 days, media also questioned the government on how the country will become digital when poor don’t have mobile. I am thankful to the media as this has helped government formulate schemes and take up initiatives to empower the poor,” ANI quoted the prime minister as saying. 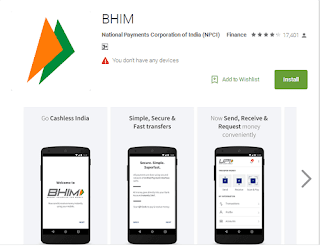 ↳Enter Mobile Number or the Payment address of the Recipient. Make sure that recipient is Registered with UPI ID.
↳By Entering the Recipient Name and Account Number and Bank IFSC code.

You can Receive Money from anyone using two methods are given here.

By Entering the Mobile Number or Payment Address.
By Generating QR code for a Particular Payee.
Scan and Pay online:-

Users Generate a QR Code which can be scanned by other users to make online Payments using BHIM App.

Limit of Maximum Transaction in BHIM App is Fixed for Everyone There is a Maximum of Rs. 10,000 Per Transaction Permitted and Rs. 20,000 Within 24 Hours.
How to install BHIM App in Andriod

Customer’s use the BHIM APP by following the Steps are Given here. steps to install the BHIM App for UPI based Payment.

→First Visit the Google Play Store.
→In the Search Bar Search ” BHIM App“
→Select the “ BHIM ” app from the list after searching and hit the “Download” button.
→Click on the term & Conditions button.
→Allow for the Contact & Media.
→Register your Phone Number by Sending the OTP.
→Select Your bank from Bank List.

↳Note: BHIM App Charges 1.50 rupee for SMS verification. if you don’t have recharge in your SIM card then you are not eligible for OTP.

Step-2: Secure, Simple & Superfast. Read the given details & click on next.

Step-5: Select the Sim that is attached to your bank account.

Step-7: Select your Bank(That is attached with your selected sim no.).

Govt Launches BHIM 2.0 with New Functionalities, Additional Language Support – 2019
by Online Gujarat · 0
BHIM 2.0 : The IT Ministry on Monday unveiled a slew of new initiatives and programmes, including BHIM 2.0 that packs-in new functionalities, supports additional languages and has increased transaction limits.

LINKING OVER-DRAFT ACCOUNT ON UPI
You can now link your over-draft account to UPI which was not available until now.

SIGNED INTENT & QR
With this option, while making payment using the intent or through scanning QR, the user will get additional security in the form of signed QR / intent. With the signed QR , issues related to tampering QR as well as having non-verified entities shall be reduced.

Customer Benefits
Will be assured of the authenticity of the receiver and will be informed if the QR is not secured.
Transaction shall be done faster as app passcode will not be required in case of signed intent.

MANDATE
With this feature you can pre-authorise (Mandate) a transaction, for debit from your bank account later. UPI mandate is to be used in scenarios where money is to be transferred later, however the commitment towards that is to be done now. It is possible that the sender may forget to send money later so creates a mandate or for a service/merchant payment wherein this functionality may be required. The customer’s account shall get debited when the mandate is executed. UPI mandate can be executed one time only.

Customer Benefits
Can create mandate for payments that are to be done later.
In case of merchant payments/service, it acts as assurance to both the customer as well as merchant.

INVOICE IN THE INBOX ( VIEW & PAY)
So far when a collect request was sent you could only verify the amount being paid and make the payment post entering the UPI PIN. Now prior to making the payment you will be able to check the invoice being paid via a link and thereby verify the details of the transaction before you pay for the same. This functionality is only available for the invoices of verified merchants.

Customer Benefit
Gets to view the bill in the UPI app, verify the details and pay the invoice.