The government would set up Mahila Shakti Kendras at village level in 14 lakh anganwadi centres with a total allocation of Rs 500 crore.“This will provide a one-stop conversion support system for empowering rural women with opportunities for employment, skill development, digital literacy, health and nutrition,” he said. The minister added that a nationwide scheme for pregnant women was announced earlier by Prime Minister Narendra Modi on December 31 last year under which Rs 6,000 will be directly transferred to bank accounts of pregnant women who undergo institutional delivery and vaccinate their children. 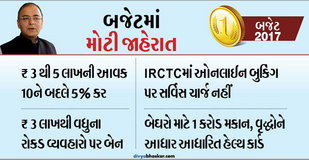 ➣Highlights of Arun Jaitley’s Union Budget speech:
➣Propose to reduce existing rate of taxation of those with income between 2.5 lakh to 5 lakh from 10 per cent to 5 per cent
➣RBI to launch electronic bonds
An amendment being proposed to RBI Act to enable the issuance of electoral bonds for political funding
➣Political parties will be entitled to receive donations by cheque or in the digital mode from their donors
➣Maximum cash donation any party can receive will be Rs 2000 from one source
➣Tax rate on small firms cut to 25 per cent
➣Tax sops extended by three years on overseas borrowings like masala bonds
➣RBI Payments Regulatory Board for digital payments announced
Norms for incentives under affordable housing scheme eased
➣Political parties continue to receive most funds through anonymous donations
➣SIT has suggested no cash transaction above Rs 3 lakhs. Govt has accepted this
I propose to reduce basic customs duty on LNG from 5% to 2.5 per cent in 2017-18
Not to remove Minimum Alternative Tax in 2017-18; Propose to allow a carry forward of MAT for a period of 15 years as against 10 years now
➣Income tax for small companies with an annual turn over of 50 crore, now to pay 25 per cent , a 5 per cent reduction
➣Capital gains tax to be exempted, for persons holding land from which land was pooled for creation of state capital of AP
➣India largely a tax non-compliant society
Revenue deficit pegged at 1.9 per cent
➣The net tax revenue grew by 17 per cent in 2015-16
Plan to extend basket of financial instruments to which the capital gains can be invested sans payment of tax
➣There is an urgent need to protect the poor from chit fund schemes, draft bill placed in public domain
➣Due to demonitisation advance tax on personal Income Tax increased by 34.8 per cent
Out of 3.7 crore who filed tax returns in 2015-16, only 24 lakh persons showed income above Rs 10 lakh
➣Rs 10,000 crore for recapitalisation of banks
We are largely a tax non compliant society, when too many people evade taxes burden falls on those who are honest
➣FRBM review committee recommended 3% fiscal deficit for next 3 years
Increased allocation for scientific ministry to Rs 37,435 cr in 2017-18
Fiscal Deficit target for 2017-18 is 3.2 per cent
Total resources being transferred to the states  and territories with legislature is Rs 4.11 lakh crore
➣Defence expenditure excluding pension at Rs 2.74 lakh crore
Total expenditure of budget 2017-18 has been placed at Rs 21.47 lakh crore
➣Two new schemes to be launched for adoption of BHIM digital payment app
New ETF with diverse central PSUs to be launched in 2017-18
➣LIC scheme for senior citizens with guaranteed 8 per cent return
➣Aadhar enabled payment system to be launched soon;Banks have targeted to introduce additional ➣10 lakh Point-of-Sale terminals by March 17
Government considering introduction of new law to confiscate assets of offenders who escape the country
By 2019 all coaches of Indian Railways will be fitted with Bio-Toilets
➣Chandigarh and eight districts of Haryana have been declared Kerosene free
➣Unmanned railway level crossings to be done away with by 2020
Propose to double the lending target of Pradhan Mantri Mudra Yojana and set it up at Rs 2.44 lakh crore for 2017-18
➣3.5 Crore youth will be trained under Sankalp program launched by the government
➣Railway related state-run companies like IRCON and IRCTC to be listed on stock exchanges
During 2017-18, another 5 lakh ponds will be constructed, for drought-proofing
➣Foreign Investment Promotion Board to be abolished
Road sector allocation at Rs 64,000 crore
➣Solar plan phase 2 to add 20,000 MW capacity
Mission Antyodaya to bring 1 crore households out of poverty and to make 50,000 Gram Panchayats poverty-free
➣Action plan to eliminate Kala Azar & Filariasis by 2017, Leprosy by 2018, Measles by 2020 & Tuberculosis by 2025
➣Total infra outlay pegged at over Rs 390,000 crore
The Foreign Investment Promotion Board has been abolished
Transport sector allocated Rs 2.41 Lakh Crore and Bharat Net Project allocated Rs 10,000 crore
➣Unmanned level crossings to be done away with by 2020
Charges for e-booking of railway tickets through IRCTC withdrawn
➣Railways will integrate end to end transport solutions for selected commodities through partnership
By 2019, all coaches of Indian Railways will be fitted with Bio-toilets
Atleast 25 stations expected to be awarded during 2017-18; 500stations to be made differently abled-friendly by providing lifts and escalators
➣A new metro rail policy will be announced, this will open up new jobs for our youth
Drought proofing of Gram Panchayats via construction of five lakh ponds across India
Rail safety fund with a corpus of Rs 100,000 crore to be created over a period of 5 years
➣Steps will be taken to launch dedicated trains for pilgrimage and tourism
➣Two new All India Institute of Medical Sciences(AIIMS) to be set up in Jharkhand and Gujarat
Total allocation for rural, agricultural and allied sectors for 2017-18 at record Rs 1.87 crore, it is up by 24 per cent
➣For senior citizens, Aadhar cards giving their health condition will be introduced
Safe drinking water to cover 28,000 arsenic and Fluoride affected habitations in the next four years
Open defecation free villages are now being given priority for pipe to water supply
For youth, proposed to introduce a system of measuring annual learning; Science to be given focus
➣We have moved from a discretionary administration to a policy-based administration
Expectations included burning issues like inflation and price rise, issue of corruption & crony capitalism
➣Our government was elected amidst huge expectations of people, the underlying theme of expectations being good governance
➣Hope to resolve all issues regarding GST via consultations
➣We are moving from informal to formal economy & the Government is now seen as a trusted custodian of public money
Agricultural credit target fixed at Rs 10 lakh crore
➣Government announces 10 new schemes under Budget 2017-18
Agriculture expected to grow at 4.1 per cent in current year
➣Model law on contract farming to be sent to states for adoption
➣MGNREGA allocation raised to RS 48,000 crore
➣One crore houses for poor by 2019